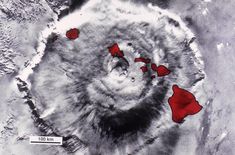 The martian volcano Olympus Mons is one of the largest volcanos in the solar system, measuring over 600 km across & rising more than 27 km above the surrounding plain. In this view, Olympus Mons is compared to the Hawaiian Islands, & demonstrates the value of comparative planetary volcanology. Notice that the Island of Oahu would easily fit inside the summit caldera of the martian volcano. 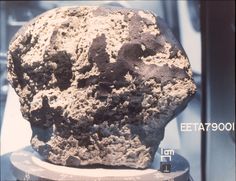 This meteorite, EETA 79001, found on the ice in Antarctica, & is almost certainly from Mars. The cube at the lower right is 1 cm on a side. The meteorite is partly covered by a black glassy layer, the fusion crust. Inside, the meteorite is gray. It is a basalt, very similar to basalts found on Earth. It formed in a volcanic eruption about 180 million years ago. This meteorite contains a small amount of gas that is chemically identical to the martian atmosphere.

Canada and Valles Marineris and the Tharsis Bulge

Comparison of Valles Marineris, the Tharsis Bulge, and Olympus Mons with Canada. Prepared for NASA by Stephen Paul Meszaros. 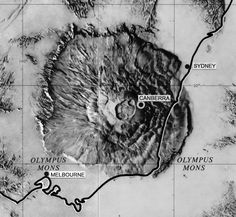 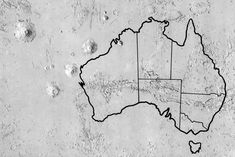 Australia and Valles Marineris and the Tharsis Bulge

Comparison of Valles Marineris, the Tharsis Bulge, and Olympus Mons with Australia. Prepared for NASA by Stephen Paul Meszaros. 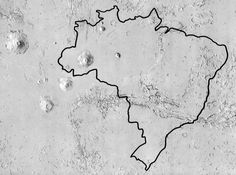 Brazil and Valles Marineris and the Tharsis Bulge

Comparison of Valles Marineris, the Tharsis Bulge, and Olympus Mons with Brazil. Prepared for NASA by Stephen Paul Meszaros. 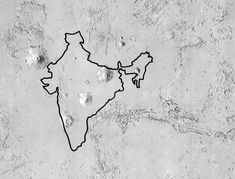 India and the Tharsis Bulge and Valles Marineris

Comparison of Valles Marineris, the Tharsis Bulge, and Olympus Mons with India. Prepared for NASA by Stephen Paul Meszaros. 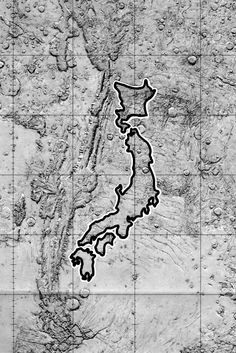 Comparisons of Valles Marineris with Japan. Prepared for NASA by Stephen Paul Meszaros. 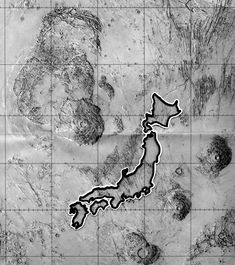 Japan and the Tharsis Bulge

Comparison of Olympus Mons with Japan. Prepared for NASA by Stephen Paul Meszaros. 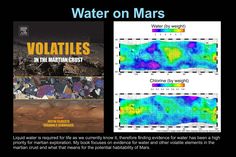 Liquid water is required for life as we currently know it, therefore finding evidence for water has been a high priority for martian exploration. My book focuses on evidence for water and other volatile elements in the martian crust and what that means for the potential habitability of Mars. 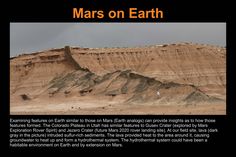 Examining features on Earth similar to those on Mars can provide insights as to how those features formed. The Colorado Plateau in Utah has similar features to Gusev Crater & Jezero Crater. At our field site, lava (dark gray in the picture) intruded sulfur-rich sediments. The lava provided heat to the area around it, causing groundwater to heat up and form a hydrothermal system. The hydrothermal system could have been a habitable environment on Earth & by extension on Mars. 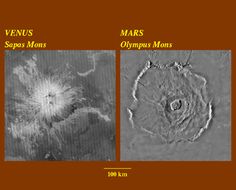 Comparison of Volcanos on Venus and Mars

The image on the left is a Magellan radar image of Sapas Mons, one of the larger venusian volcanos, shown at the same scale as a Viking image mosaic of Olympus Mons, the largest volcano on Mars. The two volcanos are comparable in diameter, but Sapas Mons rises only 4 km above the surrounding plains while Olympus Mons is more than 20 km high. Prepared by Robert Herrick.

This view of the lower front & underbelly areas of NASA's Mars rover Curiosity combines 9 images taken by the rover's Mars Hand Lens Imager during the 34th Martian day, or sol, of Curiosity's work (Sept. 9, 2012). Curiosity's front Hazard-Avoidance cameras appear as a set of 4 blue eyes at the top center. Fine-grain Martian dust can be seen adhering to the wheels, which are about 16 inches wide & 20 inches in diameter. The bottom of the rover is about 26 inches above the ground. 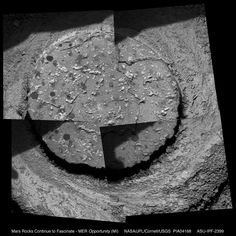 This microscopic image of a drill hole cut into a martian rock nicknamed "Ice Cream" by the rover's rock abrasion tool shows cross sections of round concretions 0.04 to 0.08 inches wide. Science team members are debating whether the grayish-looking smudges that are not as round are concretions or some other feature. Opportunity took this mosaic of images with its microscopic imager on Aug. 6, 2005. The area shown is approximately 2.4 inches wide. 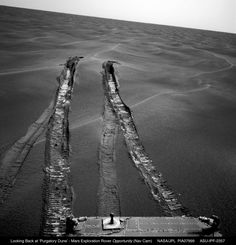 Looking Back at ‘Purgatory Dune’

The wheels of NASA's Mars Exploration Rover Opportunity dug more than 4 inches deep into the soft, sandy material of a wind-shaped ripple in Mars' Meridiani Planum region during the rover's 446th martian day, or sol (April 26, 2005). Opportunity used its navigation camera to capture this look back at the ripple during sol 491 (June 11, 2005), a week after the rover drove safely onto firmer ground. The ripple that became a sand trap is about one foot tall and 8 feet wide. 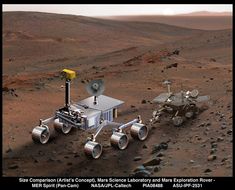 An artist's concept of NASA's Mars Science Laboratory (left) serves to compare it with Spirit, one of NASA's twin Mars Exploration Rovers. The images of Spirit and the more advanced rover are both superimposed by special effects on a scene from Mars' "Columbia Hills," photographed by Spirit's panoramic camera on April 13, 2005, and presented here in false color